The Devil’s Trumpcard
Challenge as a tool to evolve on

by Ingrid Schippers on January 24, 2017 with 0 comments Dutchbuzz blogs, Nan Yar Who Am I personal development cards, News 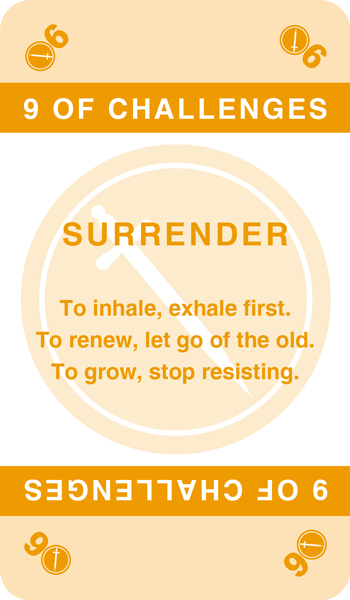 Some of the 78 cards  in the  traditional way of Tarot reading  have a pretty bad reputation.

One of them is card number 13, which in fact as one of the only cards does not carry a title, but with the image of a skeleton leaves very little to our imagination.In our western world’s matter-oriented ways of thinking, “death” is particularly seen as the end of life rather than a phase of transition. This while ‘death’ can also be seen as a part of life and a link in the ongoing cycle of life and death.

Another repellent card seems to be number XVI The Tower, carrying the image of two people falling out of a stronghold. Again in our matter-oriented western world we tend to shy away from the thought of having to detach ourselves from material security when it is seen as life’s only security.

This, while wealth is in fact the only aspect of being human, that can not be taken to the other side, (whether you believe in it or not)  The only certainty we really have in life is the realization that we are spiritual beings, ‘trapped’ if you will in a physical body (symbolized by the tower).  Walking the spiritual path inevitably comes with detachment from the material aspect of life.

The Trump card of all ‘bad cards’ however might well be card number XV, The Devil; or as I have dubbed it in the Nan Yar Who Am I interpretation: The Anti force.

So lets stay with that thought for a while. Lets say the Anti force is the worst card that can appear in a reading.

After studying the meaning of the cards from an anthroposophical point of view for many years, I have reached a totally opposite conclusion and feel the anti force might in fact well be the most rewarding card in the whole deck.

If it wasn’t for the anti force people would not move on with their lives. If only hapiness is our share and everything in our lives is perfectly fine; then what is there to evolve on?
If we can sit on the couch all day long and zap television; if we can eat, drink and be merry as much as we want, if everything is already sorted out; then how do we achieve building up something that will give us the satisfaction of using our gifts to express who we are?

Already I can sense resistance in many who read this. 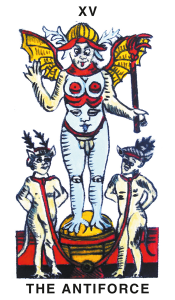 “O yeah sure ” I can hear them say, “You try to overcome what I have to overcome in my life; that will make you speak differently about the antiforce being a rewarding card. There is no reward in being miserable!

Well….I’m sorry, but I tend to disagree.
I have lost loved ones; have been deprived of happiness I felt was rightfully mine; I have been resentful, bitter, desperate and have at some point asked the powers that be, how much longer they wanted me to stay on this godforsaken earth. And yet, when I look back at it now; I see how much all struggle has brought me; How it has lifted me to a higher level of understanding and has made me content with what I have and who I am today; with assets much more profound than being blissfully happy and able to do all I can do and eat all I can eat all day.

And then, when I see images of people all over the world, getting up in great numbers and march in protest only a day after the inauguration of the new president of the united states; I see the same process happening.
People who are being denied their right to happiness; people who grieve over their loved ones who are being deprived of the healthcare they are entitled to; people who are resentful and bitter and wonder how much longer they can last on this godforsaken earth.

Yet see what their struggle brings. It brings them the united effort of raising their voices against injustice; against the Devil’s Trump card, something they would never have done, if all had been nice and easy.