by Ingrid Schippers on September 22, 2020 with 0 comments Dutchbuzz blogs, Nan Yar Who Am I personal development cards 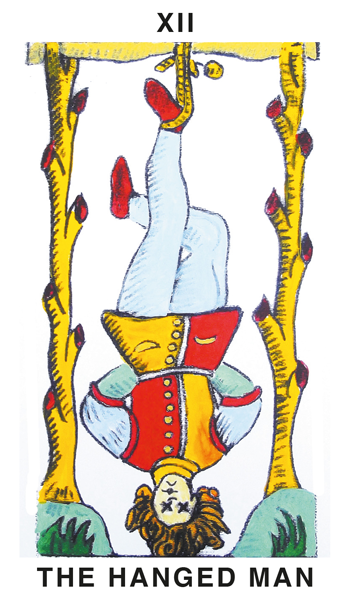 Last week I had to drop off something in Benoordenout, an area of The Hague, where I used to live in my married days. Our children, who are now all in their twenties, spent a big portion of their childhood there, going to school, playing their field hockey games, celebrating their birthdays

The particular area I was revisiting holds a small old fashioned shopping mall.  My children spent many a queen’s day there displaying their old puzzles and toys for 50 cents a piece on the free-market.  It was a funny sort of déja vu to be back. I recognized some familiar neighbourhood faces. They’d grown quite a bit older; serving as a mirror for how my own life had gone fast forward.

But there was another group of people too; a younger generation of people mirroring exactly what I used to do 10 – 15 years ago. They were shopping. It was almost as if they were acting out the old days for me. It was weird to see them coming up the escalator of the supermarket, which runs past the street window of the shop, so while standing outside one can see the people being rolled up from the basement to the first floor.I observed them standing behind their shopping carts, neatly separated by 1.5 meters, rolling up the gradient.

The sight reminded me of a conveyer belt. It seemed like the basement area was producing consumers, shipping them towards the till on the first floor. All customers had a  same sort of dis-engaged expression on their faces and they all sort of leaned against their shopping carts, looking around at nothing in particular, waiting to arrive at their destination.

‘Did I do that too?’ I wondered. Was that me 15 years ago? Shopping for family dinners and school lunch-boxes? Did I stand leaning against my shopping cart like that? Was I looking around me at basically nothing waiting to be escalated upstairs? How many times had I stood there in line? How many hours had I spent organizing what I needed to organize in order to get through to the next moment organized? In fact how much of my lifetime have I effectively spent till this very moment, waiting in lines to get to my next point of call, simply killing time as I am waiting;  getting the logistics right, rather than taking in new life experiences. 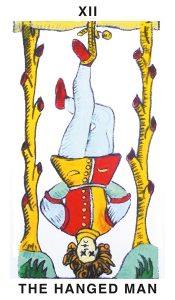 The image of Charley Chaplin at the conveyer belt in his movie Modern Times comes to my minds eye, going through the same motion every time again, trying to keep up with the pace of production; a job without apparent purpose other than tightening something onto something else, which is part of something bigger that needs to be produced, sold and used.

Do you ever wonder; how much time of your life is taken by treadmills of the system; the wheels of logistics?

The reason I chose the Nan Yar Who Am I interpretation of the Hanged Man to go with this blog, is because he sees the world from a different angle. He in fact goes through the trials and tribulations to gain more experience, rather than stay in line with the logistics of life. We seem to be doing a lot of leaning against our shopping carts, oblivious to what goes on in the rest of the world except when it also concerns us.

Card number XII, The Hanged Man, the card in between the card of The Force (XI) and Transformation (XIII), is part of the second row of 7 cards, depicting the Journey of the Soul while its owner is busy with the logistics of life on earth. The soul does see matters differently; it’s just that we do not always feel it tap on our shoulder…..

Click the card(s) to read more on the meaning….

← State of Fear
A Recipe for Healing →