State of Fear
on how to control the public

by Ingrid Schippers on September 15, 2020 with 0 comments Dutchbuzz blogs, News

With the circumstances as they are in the world right now, I find myself thinking a lot of the novel ‘ State of Fear’, published in 2004 written by American author Michael Crichton. You’ve probably heard of Crichton as the creator of Jurassic Park and the television series E.R.

His debut, ‘The Andromeda Strain’, made him famous overnight in 1969.  To this day – and I might add to this day more than ever – the story about an unknown virus threatening humanity  is a constant reminder of our vulnerability. Also the story of Jurassic Park, posing as an adventure park for grown ups, holds a warning not to mess with the genealogy of evolution, as does another of Crichton’s novels, titled Next, discussing Bigpharma’s hunt for power and money rather than cures.

What many may have missed is that ‘State of Fear’  brought Michael Crichton to testify before US congress. Why? Because it deals with a mechanism as old as ancient history where those in power used and to this day use fear as a tool to keep people in check. People who are scared tend to feel powerless and look up to their leaders for a solution, which puts these leaders in control. In the Netherlands we recently saw this happening with the ‘noodwet’, the so called emergency law, giving parlement and city councils more authority to act during times of apparent danger, although in this particular case a group of people also stood up against the measurement.

It is dangerous in itself write about these sort of subjects and bring them to the people’s attention. Crichton knew that. On his website, he talks about his reasons for and the dangers of writing State of Fear and even states :

Crichton was indeed threatened as a result of  writing State of Fear; by high up politicians, but also by  followers of these politicians  all because, in State of Fear, Crichton brings a professor Hoffman to the stage; who explains of the ‘Fear’ theory and its mechanism to keep people subservient by pointing out circumstances  to be afraid of.

The novel ‘State of Fear’ contains three appendixes, including an 18 page bibliography, that support the research. I would highly recommend one book mentioned titled  ‘The Skeptical Environmentalist’ written by Bjorn Lomberg, which deals with how statistics shape our view of the world, while in truth, reality may be a whole lot different. Also Lomberg suffered relentless attacks because of writing this book. On this Crichton comments

This can only mean his conclusions are unobjectionable in any serious scientific way.

Food for thought in these questionable times of polarization and the use of propaganda by politicians who want to gain yet even more control.  For those interested in this subject, here are the  links to several articles regarding this subject:

Michael Crichton in his own words State of Fear

Wikipedia on State of Fear. 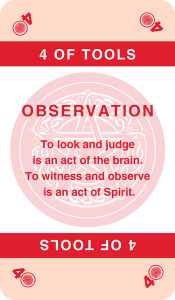 The Nan Yar – Who Am I card I have chosen to head this blog is the 4 of Tools: Observation,
the number 4 signifying the comfort zone – it being quite easy to follow the opinion of others when confronted with a situation one finds hard to solve oneself (as in people looking to politics to solve the world’s problems rather than picking up their own glove) ;
while the Suit of Tools shows the options earthlings have to use their own spirit rather than simply accept what they read and surrender to the judgment that is implemented by others.
As I said food for thought in these questionable times of polarization and the use of propaganda to gain even more control…