by Ingrid Schippers on July 23, 2015 with 0 comments Inspiration, Nan Yar Who Am I personal development cards 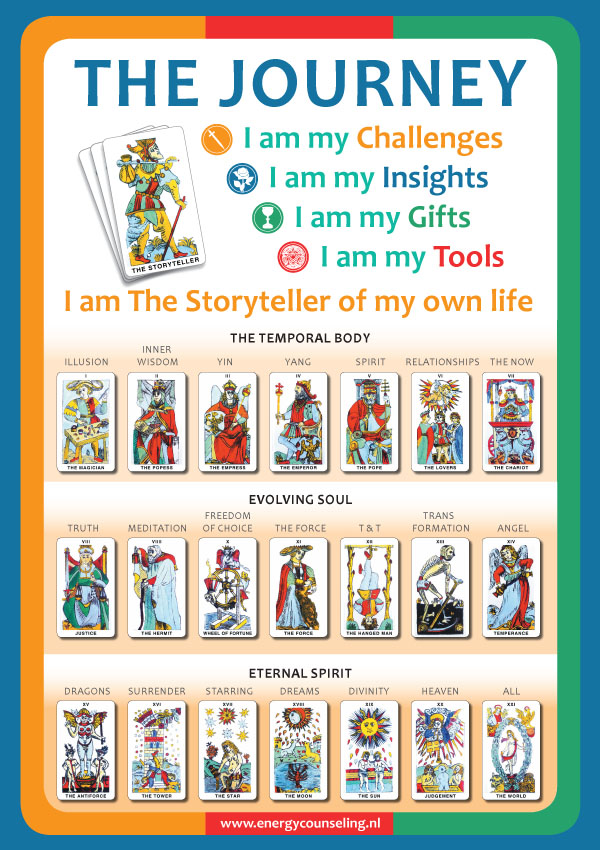 In daily life perception, there appears to be one physical reality only. Our senses are in fact programmed to perceive only that which we can touch, see,hear, smell and taste.

Yet there is more to existence than what we can weigh and measure, elements as important as our physical presence .
Even more so, it is in these other layers of reality the sources of personal development are located through which we can communicate with our selves.
This module explains how this is expressed in the Trump cards.

All Trump cards, meaning the cards the Major Arcana consists of, the numbers I to XXI ,  with the Nil card, The Storyteller, leading the way, reflect a human life starting at birth all the way to the day to pass over to the spiritual world. These segments or phases are personified by ‘Archetypes’ mirroring their characteristics.

The ascending numbers (O tot XXI) do not imply an ascending value of the cards in the sense of XVII The Star being ‘worthier’ than VII The Chariot.  Similar to events happening in daily life, the moments in which we manifest certain behavior do not necessarily occur in chronological order. At one time we are card number III The Empress, while in another moment we’ll be card number XII The Hanged Man.
The deeper meaning of each individual card/archetype will be explained further on.

Each card is responsible for a characteristic of who we can be in its own way and just as important as any other card. Sometimes it are the small gestures that make the day. It is not always necessary for something to be ‘big’ or ‘bigger than’ to be effective.

This is why each archetype of each trump card will reflect differently with each personality. In this context The Storyteller is again best capable of telling its own life-story. Of course one connects during life, with other people and opportunities, being part of  the bigger picture after all (XXI The World), yet ultimately you unlike any other, know exactly what an archetype reflects for you.

The number 3 in the layers of Trump cards.

The meaning of 3 emerges in many different esoteric settings. In the numerology interpretation of the Nan Yar – Who Am I Tarot the 3 is seen as the number of creation, which can be described as follows in the order of things: :

In the capacity of the number of creation the 3 also appears in the Nan Yar – Who Am I interpretation of the Tarot.  Divided into 3 layers of 7 cards,(I to VII, VIII to XIV, & XV tot XXI) the groups of trump cards mirror 3 different segments of being that c0-evolve in the life of The Storyteller. These layers comprise groups of archetypes carrying their own unique qualities (in addition to their unique individual qualities) as part of their role in a certain layers of life.

The Nil card, The Storyteller, precedes the 3 layers and is, as always, impartial to the characteristics of any other card, thus treading the world with an open mind, getting to choose from all aspects of life, thus creating the opportunity to get the most of it.

The following overview of the 3 realities, begins with the gatekeeper of each reality. The picture heading this module gives a full overview of all cards and the reality they are united in.

1.The Temporal Body.  I The Magician – VII The Chariot.

Briefly summarized, the first 7 archetypes of the Trump-cards mirror the conditions needed to function in the physical world.

The second layer of seven trump cards concerns the conditions enabling the soul to travel and co-experience along on the physical plane.

The third layer of seven trump-cards involves eternal spirit. All things created by mankind on earth, mirror themselves in eternal spirit, causing the individual human being to be responsible for  his or her own actions and subsequent creation of  Karma as a result of those actions. As a ball rolls away when you kick against it, every action taken in life has a consequence.

As such all trump cards reflect their own particle of  the total of things and guide us through our own interpretation of it.

When drawing a card, it is important to remember the cards are not there to tell you what is right and what is wrong, yet merely to make you aware of your possibilities in their context.

Further explanation of the meaning of the cards can be found on the energycounseling website under: Nan Yar: all nan yar cards.

Next module: The 4 Colors…