by Ingrid Schippers on July 28, 2015 with 0 comments Inspiration, Nan Yar Who Am I personal development cards, News

The phenomenon of ‘color’ is an integrated part of existence to such an extend, that we could hardly imagine a world without it. Its presence is seen as so normal – similar to the normalcy of being able to breath automatically,- that we are partial to overlooking the deeper meaning of it.

Color however is much more than a trend or a technique to enable us to distinguish one item from another. Color is also a reflection of certain characteristics.   We speak for example of ‘green energy’ where it is regarded as more environmentally friendly, reflecting its essence rather than its actual color.

We also know exactly what is meant by ‘something working like a red flag’ or when someone feels ‘blue’. We can give a ‘full color’ version of something, including each and every detail or a ‘colored’ version meaning we tell something in such a way that we change the actual essence of it.

Artists use color to reflect the character of something. Should Count Dracula be portrayed wearing a baby-yellow cape, he would hardly be threatening.  It is the black version of him that reflects the emotions he summons up.

In the outside world we need color to be able to distinguish one thing from the other. If everything would be in the same shade it would lack visual perspective and all look the same, like air. As soon as something materializes it gains a certain essence and with that a certain color.
People who can see aura’s describe an ever changing ballet of colors displaying itself,  revealing whole life stories.

Color is used in meditation, visualization, healing and to cleanse. Color actually is in everything, within us, outside of us and in the same manner we are born under a unique zodiac sign, we are also born with a unique ‘base’ color.

Our use of language also displays color. Expressions such as  ‘revealing one’s true colors';  ‘to color life differently’ or ‘to defend one’s colors’, all contribute a certain value to something, originating from a certain way of thinking, feeling or willing

In the Nan Yar – Who Am I Tarot for personal development color is used to reflect the essence of the 4 different suits, existing next to the 22 Trump cards (the Major Arcana).
The Minor Arcana consists of the 56 remaining cards, divided over 4 groups of 14 cards, numbered 1,2,3,4,5,6,7,8,9,10 plus the court cards page, knight, queen & king.

The 4 suits are directly derived from the ordinary card game:

The Marseille Tarot depicts these same suits as:

From the personal development perspective of the Nan Yar – Who Am I  card kaartspel, these same groups are typified as:

The choice of colors for each suit is motivated as follows:

Challenges. Color: Orange.  The cards of the Challenges suit of the Nan Yar -Who Am I Tarot represent the development of the I-consciousness, the spiritual component of each human being that co-exists and travels along through all phases of life.  In essence this involves the Karma each human being generates by the way he or she thinks, feels and acts upon; the Karma that is transported from one life to the other.  I have chosen for orange to represent this suit, as it is also regarded as the main color of  the second chakra. which harbors the creative consciousness to create ones own life and reflects the manner in which someone relates to the outside world.

Challenges are governed by the element Fire* fueling the expansion of the I-consciousness in the Michael-culture humanity develops in at present, with the sword as its symbol..

(* In this , the Nan Yar Who Am I interpretation differs from the Tarot of Marseille which assigns the element ‘air’ to the suit of swords.

The color of Insights is derived from the elemant Air , connected this group of cards, in turn connected to the 5th Chakra, the throat chakra, which in the old yoga traditions has been assigned the color blue.  Insights represent the personal development in life,- this being a different aspect than the development of the I-consciousness which reflects the spiritual development. Personal development originates from the experiences body and soul witness while on their earthly journey and is established through the circumstances The Storyteller encounters in the outside world. The archetypes, number- and court cards involved again reflect the essence of a group of possibilities. Their ‘values’ depend on how a human being views the world and are not ‘absolute’. One person’s blue is not necessarily the blue of someone else.

Gifts . Color:Green. The Gifts are connected to Cups and therewith the element Water  and therewith emotion. In Yoga philosophy, green is seen as the color of the heart Chakra.  When regarding love as the true ‘fuel’ on which life is based and which we evolve on, it seems to hold a certain synchronicity that  green is also the color through which esoteric energies best express themselves.  Cups represent the essence of the Holy Grail, a quest in which each Storyteller can apply its very own talents.  These Gifts are not summoned up from the brain but is something that comes naturally from the heart and in this context is heartfelt.

Tools Color:Red. Also with Tools I followed the Yoga interpretation, this time the color of the Mulahdhara Chakra,  the root chakra which in its direct connection with earth, serves as a base for the other 6 main chakras to rise up the spine. The Marseille Tarot also assigns the element earth to the coins, that correspond with ‘Tools’.
From a personal development perspective ‘Tools’, are the earthly skills and ‘apps’ through which we function.

In the examples above, the number and court cards are used intertwined. They have merely been selected to represent their color. In module 2, ‘The Storyteller as Guide of the Imaginative Force’ the essence of  Court Cards is further explained. The next module, 5: Humanity and Its Numbers. will dig deeper into the interpretation of Numbers in the Nan Yar – Who Am I personal development Tarot. 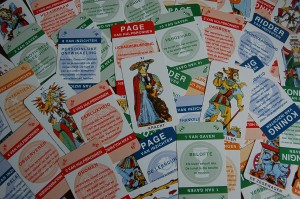 Tags: Numbers, Personal Development, tarot
← The 3 Realities and their Gatekeepers
People and Numbers. →