Traditions versus Times of Change

by Ingrid Schippers on October 1, 2017 with 0 comments Dutchbuzz blogs

Born and raised in the city of Leiden I spent every 3rd of October of my childhood celebrating the defeat of the Spanish in 1574 after a year-long-siege in which hunger and scarcity prevailed. Heroic stories were told in school, about the mayor of leiden, a Mr. van der Werff, who offered his right arm as food for the Leiden citizens rather than to surrender to the Spanish.

The story of the final combat and freeing of the city has a very Dutch quality about it as well, with the dikes being pierced 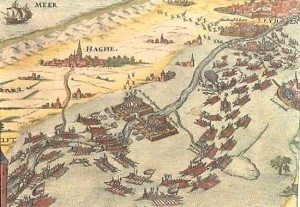 so the countryside flooded, both chasing away the Spanish and allowing the flat-bottom ships of the liberators to sail all the way to the gates of the City of Leiden and donate herring and white bread to its famished people.

Outside the walls the Spanish, in their haste to flee the flooding flatlands, left cooking pots containing potatoes, carrots, unions and meat, nowadays known as ‘hutspot’. This has become a traditional dish to eat on the 3rd of October. When you bike through Leiden on October 2nd and 3rd, the city literally oozes hutspot cooking vapors.

A liberation of over 400 years ago, still celebrated in this present day and age. A piece of history still remembered; much like the 4th of July in the USA  But do we actually still remember ? Do we actually know the essence what we are celebrating?  Or has it become a rusty tradition, an old excuse to celebrate, drink and eat?

Personally I have stopped celebrating October 3rd shortly after my teenage years and after having lived and worked abroad for a good number of years, the distance between the heritage of my town of birth and my cultural grounding became even bigger.

Looking at the big shift the world is going through at the moment, with great numbers of people moving from area of the world to  the other, much like the mass migrations between 300 and 700 CE, that were at the root of the fall of the Roman Empire, I wonder even more if perhaps it is time to let go of the old traditions and devise some new ways of looking at life.

There’s plenty tradition that doesn’t really correspond with reality anymore these days. I mean lets be fair. Are the policies of the present president of the United States in any way coherent with what the founding fathers had in mind? Is the city of Leiden still happy to be rid of the Spanish?

While to some degree I respect tradition, I think some of it, – looking at the huge tasks yet to be done to make the world a better place- could be and should be at least adjusted; sharing this time around the herring and white bread and hutspot with the people living in refugee camps or the 4th of July welcoming the people who have helped build the economy too.

Traditions I believe are there to remind us of what is important, rather than become a habit.

The spoken version of this blog, features as end note on  ‘Dutchbuzz’, the radio hour for Internationals every Tuesday ( with the exception of summer and Christmas recess) from 10 to 11 pm on ‘Den Haag FM and can be found in the Programme Archive of  the Dutchbuzz podcasts, dated October 3rd 2017