by Ingrid Schippers on October 31, 2017 with 0 comments Dutchbuzz blogs, News 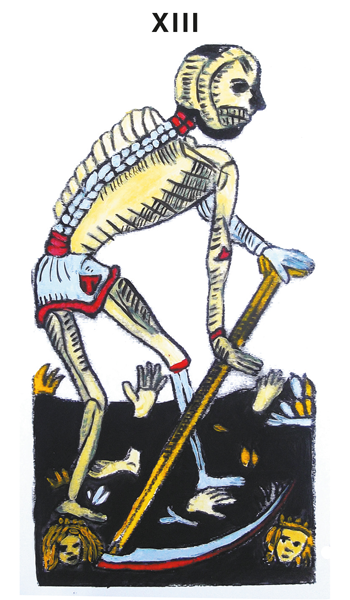 Finally a blog for which I can use a much avoided card of the Tarot as an illustration without causing too much of a stir. The 31st of October sort of makes it legitimate. I am talking about card number 13, depicting a skeleton with its scythe.

To many western cultured minds, the skeleton is associated only with death, the end of life as we know it. When people draw this card in a reading however, I am always quick to explain, it actually represents something completely different.

Similar to all Tarot cards,  card number 13 is but a medieval caricature of something people back then still believed in and even celebrated. And it goes back even further than that, back to Celtic times.

For the ancient Celts, October 31st, was the end of their year. With their crops harvested and the seedlings stored away for next year’s new beginnings, their new years day was set on November 1st.
The last day of the Celtic year was celebrated in style. People would make big bonfires, roast game, prepare their harvested foods and would dress up, wearing masks and animal hides, making themselves unrecognizable to others. All this to celebrate life and the renewal of it.

It is said a lot of babies were conceived on that particular night.
A famous and bit of unfortunate example comes out of the King Arthur legend, where Morgaine, Arthur’s sister, wearing a mask, makes love to a man dressed as a stag, which later turns out to be Arthur himself.

But then in the course of time, Christianity took over this pagan festival and obviously removed the physical bits out of the

equation. It was however still regarded as a celebration of renewal, at the same time commemorating those who had brought the people this far but had passed away; including the saints, hallowed be their names, which brings us to… Halloween.

So, last weekend, when the clock reversed itself one hour to wintertime, and introduced a period of annual winter festivities, some of you might have already hit town transformed as witches, zombies, or skeletons, without actually being aware you were celebrating an ancient feast of transformation and renewal.

If so, you might want to have a look over your shoulder to see if perhaps some former body has attached itself to your life; but again if so, don’t worry too much about it.
Unlike what present day culture wants us to believe,  the spirits of all-hallow-evening, halloween pose no threat, but simply represent transformation.

The spoken version of this blog, features as end note on  ‘Dutchbuzz’, the radio hour for Internationals every Tuesday ( with the exception of summer and Christmas recess) from 10 to 11 pm on ‘Den Haag FM and can be found in the Programme Archive of  the Dutchbuzz podcasts, dated October 31st 2017

or send me a mail at info@energycounseling.nl

Tags: death, halloween, saints
← Let’s All Embrace Each Other NOW!
Why Bears Hibernate →